As the title suggests, my endeavor into the religious aspect of Here I Stand didn’t go so well. But first, a little background.

In the first game, I played as the French. That game didn’t go well for me after making several mistakes in the first negotiation phase and just learning how to play. My second go around, I played as the Ottomans. I had some success as a pirate, but Vienna just couldn’t be toppled. This time I wanted to learn the religious side of the game. Each play was using the 1532 tournament scenario, this game was the same:

Turn 4
I was dealt some mediocre cards, but did get Diplomatic Overture which gave me some bargaining power. I immediately teamed up with the English. As we played out the turn, I used my event to give the English a 2CP card and drew a 4 and 5 CP card – spent 7 to get 9. This was great! Unfortunately the Hapsburgs played an event which took that 5 CP card out of my hand, so the first turn was fairly uneventful. I didn’t gain in Reformation attempts, but didn’t lose either. The English scored a huge hand, Michael Servetus and Copernicus! Fortunately, he played Servetus for the CP, so I was able to use my home card to score one easy VP.

Turn 5
This time I picked up Printing Press on the deal! I allied with the English, again hoping to score big in England with the Reformation. I also used this turn to take back the electorates. I was able to take one, but at the cost of two cards. With Printing Press in effect, I started to convert Europe to Luther’s teachings. I was up 3 VP this turn with a good chance of gaining 3-4 more in the final turn. However, the English now had a good lead after taking Paris! I couldn’t rely on help from them anymore without giving them a win.

Turn 6
This time my hand was lousy – low CP value cards and nothing to help me debate or reform. I went fishing in the diplomacy phase, but only the English could help me with Printing Press. But he had the lead and wanted cards. The Hapsburg, Papacy and French were teaming up to take back Paris from the English, but they needed my help. They wanted me to give France a card draw in exchange for the Hapsburg not playing Erasmus or another card against me. I couldn’t take either deal. I would need all my CP and a little luck, but I had a chance of victory if I could get 4 VP. I figured I could take my final electorate, be +1 on cities reformed and gain one more VP somehow – possibly disgracing a Papal debater with Luther. As the turn played out, I took my final electorate, but it was again an expensive endeavor. Unfortunately, the Pope had some hot dice and lots of card. He forced my hand in the end game by calling a debate. If I lose the debate, I lose the game. I had to play my Here I Stand home card to use Luther in the debate. Luther still lost and with my card draw I picked up Edward VI. Not enough CP to debate and the reformation attempts failed. I lose two electorates and 5 VP from the loss of religious control of those and other cities to the Pope. Ugh…

End of turn 6 and the game

The End
It was a good game and I had a legitimate shot of winning until the final turn. I ended up with 13 VP, 4 behind the French, but it was actually a much closer game due to the huge 5VP swing in the last couple of card plays. Looking back, I think I made the right decisions in my diplomacy, but there were a few things I could have done better in my plays. I should have focused on the Full Bible translations to help win reformation attempts. The plus +1 modifier would have been helpful later in the game. Moving my army out to take the electorates earlier would also have helped in reformation attempts. Overall it was a great experience. I’m looking forward to the next game and hopefully my first victory.

The HIS Players all in colors matching their powers. Apparently eating the captured enemy leaders is allowed when you take their capital. 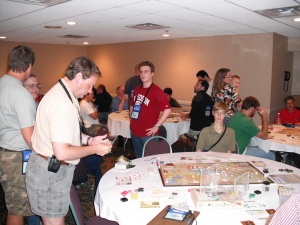 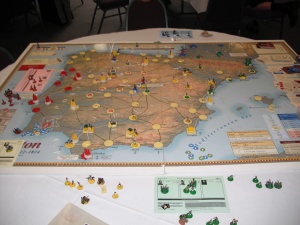 Some people add a lot of "chrome" to their games. This Wellington setup features 3D ships and troops.

I give these guys a lot of credit; the monster games spend most of a week playing one game, usually one that simulates some/all of WWII. 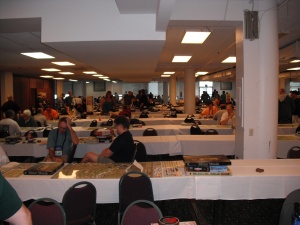