To be honest, I’m just glad we finally arrived. After all the time spent in the car, I was ready to be done. Of course, Mike, John, and I did make a detour to the Gettysburg battlefield and visitors’ center. It was a great choice and I really wish I could have spent more time there reading all the descriptions and watching the videos in the museum, then walking the battlefield and trying to place myself back in time during the heroics and the tragedy. But, we had a time table to keep and more driving ahead of us.

Walking into the Lancaster Host after dinner, I couldn’t really believe I was doing this. Am I really this hardcore about board games that I traveled across country to be here? I mean, I really only know a few games all that well to feel comfortable in tournament play. I’m actually pretty new to the board gaming scene too. But it was time to jump in feet first.

John and I picked up our badges, got our pictures taken—just in case we actually won a tournament—and proceeded to get a lay of the land. Basically, we saw tables laid out all around the lower level of the hotel and ready to be taken over by eager gamers. 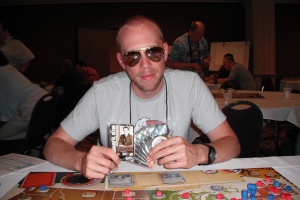 Unfortunately, we were both spent from the travel of the past few days. Meeting new and interesting people when your brain is slowly turning to mush isn’t exactly an easy prospect. So, we pulled out 1960: The Making of the President and played each other for only the second time. And despite owning the game, I once again lost to John. As we played, more and more people started filling into the room wearing the blue WBC badge. It was strange and amazing to think this many people were this excited to play board games with complete strangers.

Tomorrow, I hope to meet and compete against some of these people. I also want to score more victory points than them and leave them in stunned awe of my strategic genius, but that’s a post for tomorrow.

This morning we headed out around 8AM from Pittsburgh and drove the 3.5 hours to Gettysburg, PA to tour the battlefield. Mike is a former National Park Ranger, and so he was able to give us the inside scoop on the various controversies surrounding the building of the new visitor center. Whatever people’s complaints are, I think if they visit the center they’ll forget about them. The new museum is beautiful and contains many artifacts I didn’t expect to see, including the stretcher that Stonewall Jackson was carried away on after the Battle of Chancellorsville and the pen that Grant used to sign Lee’s surrender letter at Appomattox.

We then left Gettysburg about 3PM and drove a to Lancaster. Russ and I deposited Mike at the railroad station (he’s going to NYC) and headed to our hotel. After a quick room change–ours smelled like cigarette smoke–we unpacked our things, headed to dinner at the Texas Roadhouse, and then drove across the road to the Lancaster Host, home of the WBC. It’s about two blocks from our hotel and is situated on top of a hill. The Host has several ballrooms and meetings rooms, and the WBC is spread out around the front half of the hotel on two levels. There are three restaurants and one bar, which we’ll probably be patronizing at least once or twice.

Upon arriving, we were directed to a small room downstairs to pick up our badges and badgeholders; the latter are pretty nice. They have a clear plastic front where your name and hometown are clearly displayed, and have a zippered pouch on top so you can store your keys, cash, I.D., etc. You wear it on a cord around your neck. We also got our mug-shots taken. This is so our pictures can be displayed on the WBC Web site if we end up finishing in the top three in any game (ha!). We also received our 2009 WBC T-shirts. I had completely forgotten about this. As it turns out, if you register early enough, you get the shirt for free.

It was rather quiet when we got to the Host–perhaps 100-150 people immersed in various games. We hadn’t shown up early enough to play in the Manoeuvre tourney, and since it didn’t look like we’d be rustling up any multiplayer action, Russ and I peeked over a few people’s shoulders to see what was being played. In the back of the Host the Paths of Glory tourney was in full swing. We spotted a table with two mock-ups on it; apparently some designers were playtesting. One was 1989: Dawn of Freedom (upon web research, I learned this was, in fact, a web published game). This simulates the fall of Communism in Eastern Europe using the Twilight Struggle mechanics. The second (actually a playtest) was Washington’s War, a remake of We the People. A gentleman named Steve informed us that right now they’re in the process of trying to iron out the combat mechanics.

After about 15 minutes of wandering and realizing the crowd was already engaged in  games, we grabbed 1960: The Making of the President, and played. This was pretty rough, rules-wise. We’ve only played once, and trying to flip through a rulebook while surrounded by the murmur of conversation isn’t all that easy. But we got into the groove and finished in about two hours. As Kennedy, I snatched up Illinois and California late in the game and won with 265 electoral votes. As the game came to a close, I noticed that the traffic had considerably picked up around the convention hall. I think this was the post-dinner crowd returning. So we missed out on some potential gaming with new people, but tomorrow is full of the Sampler Showcase, etc., so we’ll be meeting people…and handing them our business cards with the blog name and URL on it.